For Midwesterners, the winter of 2018 is one that will live in infamy for years to come.  Records for snowfall and low temperatures were consistently being broken.  In fact, you would have been hard-pressed to have driven an entire city block without finding at least one home with significant ice dams. Ice dams are a sheet of ice that forms on the edge of a roof.  They prove problematic because they do not let melting snow exit the roof.  Instead, they trap the melting water onto the roof, causing it to back up underneath the shingles and even into the interior of the home. 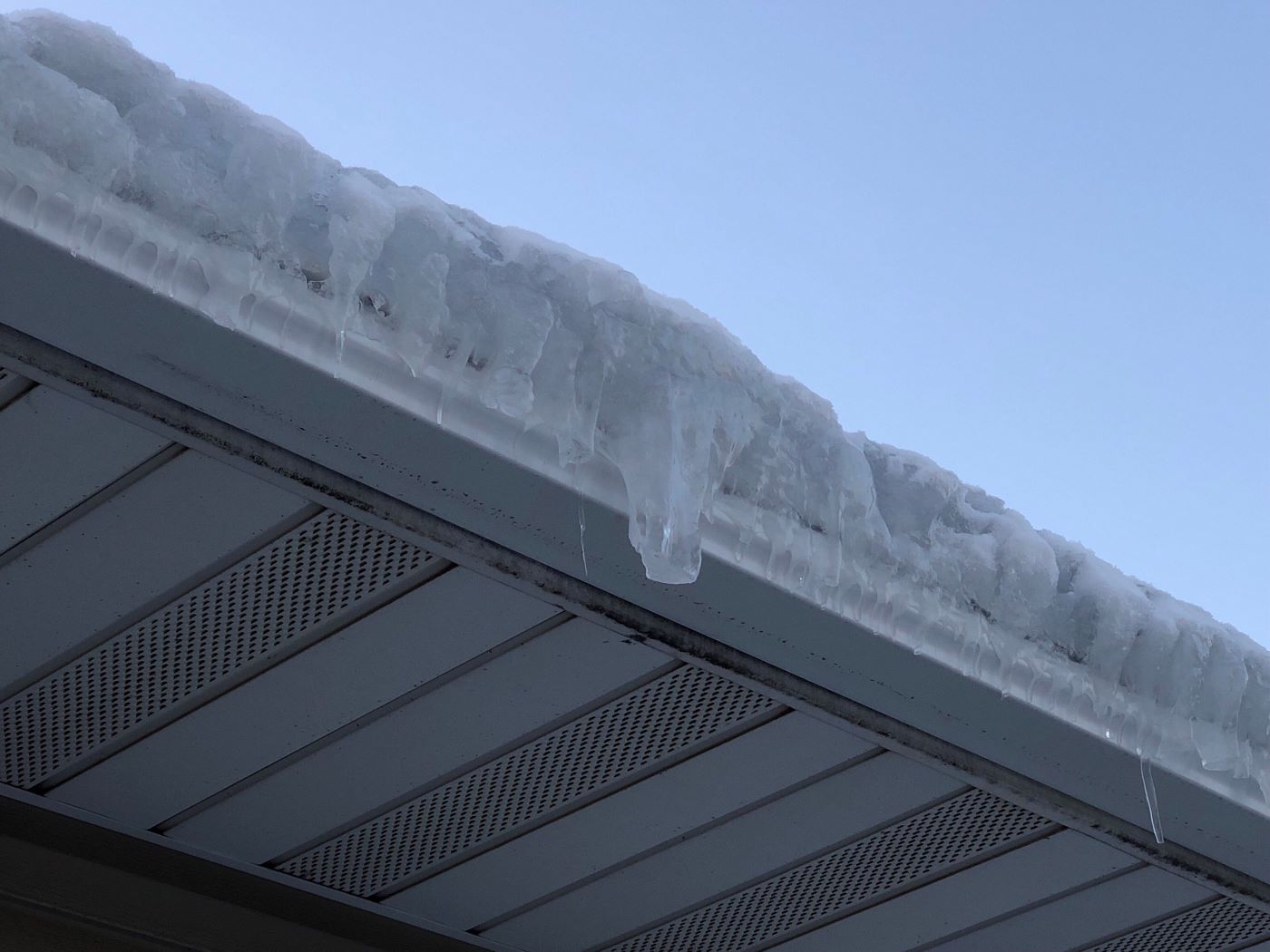 Rampant ice dams, high energy bills, and a chilly home were all reasons our client, Gerald, reached out to us to see if we could perform a heat map analysis to come up with a long-term solution for him.  Here’s a summary of the solutions we were able to provide so that Gerald never experiences the stress or discomforts of last winter again.

Insulation & Air Sealing: Our initial attic inspection showed that the area was covered with fiberglass batt insulation.  Over time, the insulation had become discolored.  This was evidence of air leaks that were transporting dust, warm air, and moisture out of the home.  While a cheaper approach would have been to try and salvage the preexisting insulation and add more, we explained to Gerald that the best long-term solution would be to remove all the accessible fiberglass insulation in the upper attic area.  Once that had been done, we sprayed an inch and a half of closed cell spray foam insulation on the entire attic floor area.  This not only created a vapor barrier, but a perm rating of less than one.  A perm rating measures the amount of water vapor filtering through one square foot of material.  The more water vapor that can permeate through a material, the higher the rating is.  In an attic, a low perm rating is critical, so that condensation and mold cannot form.  Wanting to bring the attic to an R-value of 50, our team then blew in 16 additional inches of cellulose insulation over the spray foam.  Batt insulation was used around the attic opening to regulate temperature. 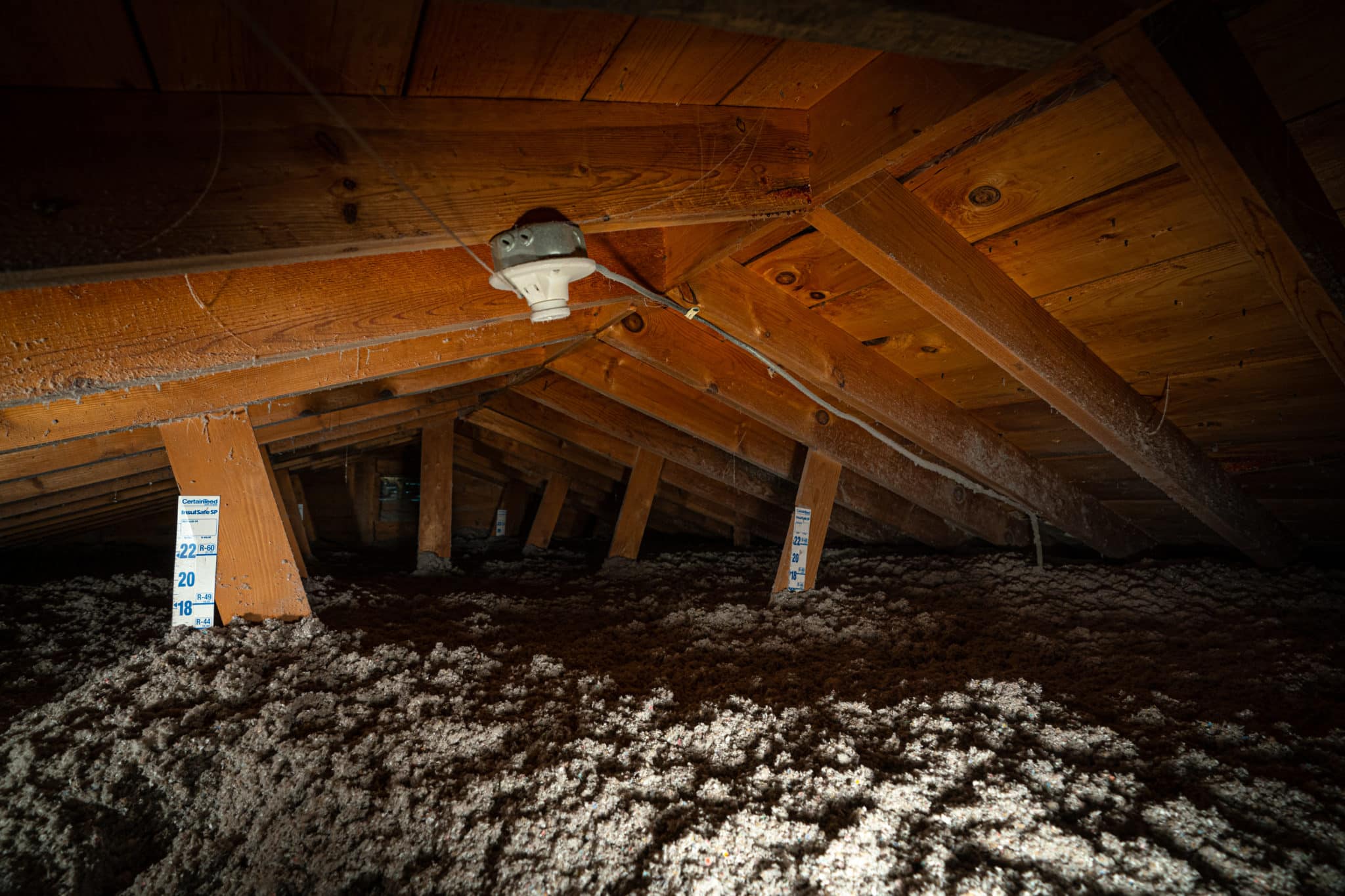 Get a Behind the Scenes Look at Gerald’s Roof Insulation and Ventilation Project:

Customer Follow-Up: In a field where reputation is everything, Lindus Construction takes great pride in having served over 75,000 happy customers since the company’s founding nearly 40 years ago.  This project was completed in the spring of 2019 and we followed up with Gerald a few months later to get his thoughts on how the project had went and the impact it had made on his energy bills.  He reported back that this summer, his home had been significantly cooler than it had before the work had been done.  In fact, he’d barely turned on his air conditioner this year.  Even though the fall temperatures had been relatively cool, as of mid-October, he hadn’t had the need to turn on his home’s furnace.

A Step-by-Step Look at This Insulation Project

"We love the look of our new gutters! Lindus was very professional and pleasant to work with. They did an exceptional job."

"Lindus did a wonderful job siding; the guys know what they are doing very polite.  We would recommend Lindus anytime.  They were always on time they answered all our questions."

Employee morale may be the #1 indicator of a successful business. Great Job Lindus!"

"Did a great job on my roof. Highly recommend them."

Our Insulation and Ventilation Projects:

View Project
Burnsville, MN Insulation & GAF Roofing Project
While a charming aspect of the home’s curb appeal, the home’s mansard roof and insulation was creating a series of issues. Learn about the long-term solutions we were able to provide.
View Project
Jack’s Minneapolis Metal Roofing & Insulation Project
Here's how spray foam insulation and metal roofing were able to alleviate this homeowner's worry of future ice dam damage on his Minneapolis 1 ½-story home.
View Project
Denny's Eden Prairie, MN Insulation, Sun Tunnel, & Skylight Project
When our client, Denny, approached us for advice on how to achieve a more comfortable and energy efficient home, we were happy to offer suggestions.
VIEW ALL RECENT PROJECTS
75% Off Installation Labor on GAF Asphalt Shingles, LeafGuard® Gutters, Infinity® from Marvin Windows.  No Payments Or Interest Until April 2023. We are also offering a free heat map analysis with insulation estimates through January 31st, 2022.
Get Your Estimate
Some restrictions may apply. Call for details.
Schedule An Appointment
Tell us when you need us and we will be there.