Ice dams on your roof spell trouble because the excess water they can allow into your home can cause damage to ceilings, drywall, and insulation.  The most effective method for ice dam removal is low pressure steaming.  This technique separates the ice from the roof without damaging the roof’s shingles.  For safety reasons, this process should be completed by a contractor using roof safety harnesses.  An alternative technique for ice dam removal is the utilization of salt pucks, sometimes referred to as ice pucks, that are placed on the roof with the intent to thaw the ice and create channels for trapped water to flow off the roof.  While in theory, this can seem like a low-cost alternative to hiring a company to steam off your roof, here are six damaging impacts of using the ice puck approach to remove ice from your roof. 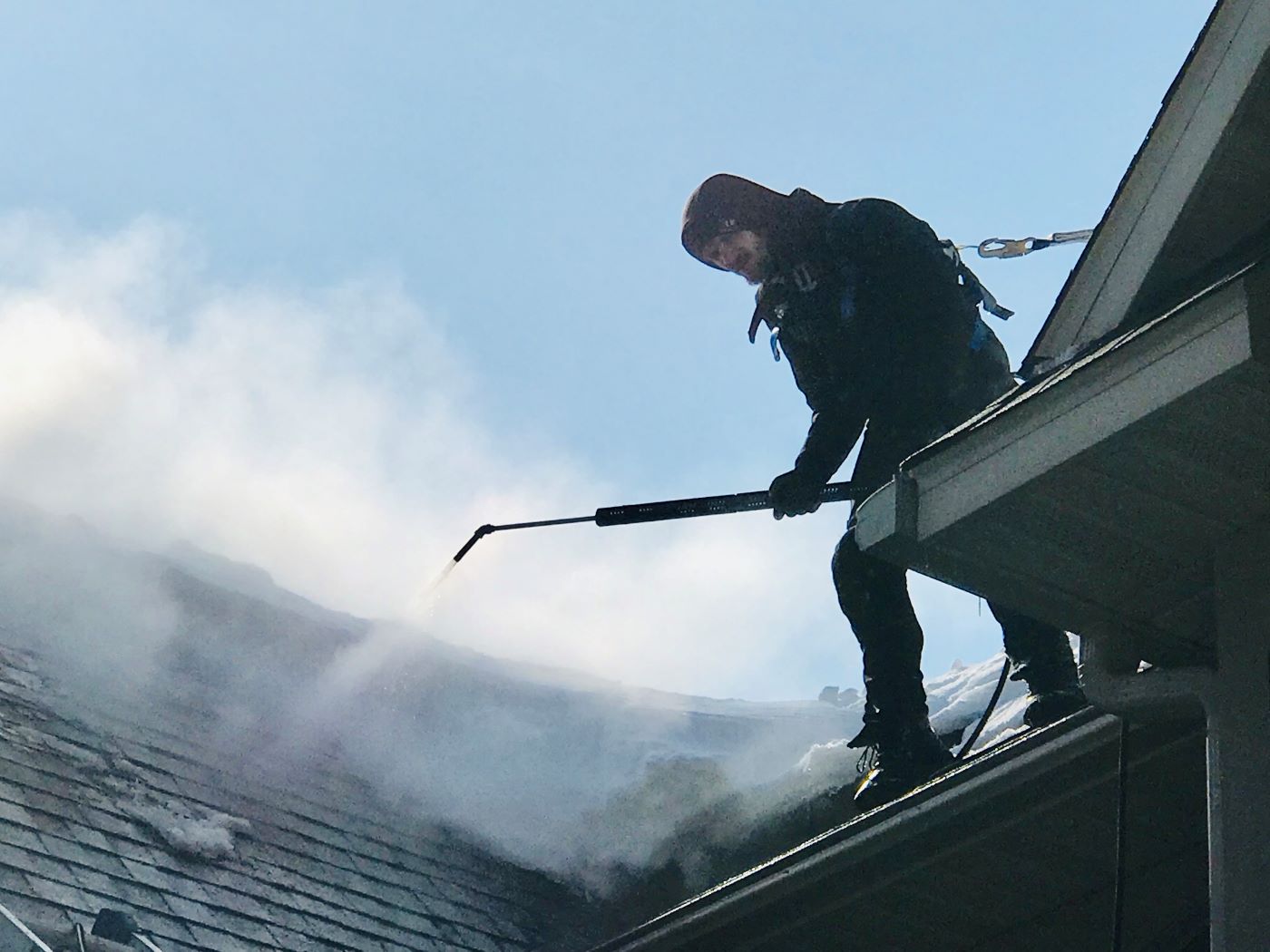 When salt pucks are used for ice dam removal, the salt that comes in contact with your roof has the potential to change the color of your shingles and not in a good way.  The white salty residue left over by the roof pucks or ice melt pucks will alter the appearance of the roof and ultimately have a negative effect on your home’s curb appeal.

The shingles on your roof are fastened with nails.  Nails that encounter roof salt pucks can begin to rust.  This leads to rust spots on the roof.  In addition, the rust minimizes the ability of the nail to hold the shingles in place, allowing for them to pull up.

Salt that washes off the roof can corrode aluminum gutters and siding.  The rate of oxidation is largely dependent on humidity levels, the alloy of the aluminum, and air temperature.

In the winter months, your home’s landscaping is hardly of concern.  However, it should be.  The effects of using salt pucks on your roof can create long-term devastating effects to your home’s landscaping.  Salt that comes in contacts with various species of plants can compromise their ability to withstand arctic temperatures.  In addition, salt that’s absorbed into the soil can absorb water that would otherwise be consumed by a plant’s roots, creating a drought-like scenario.  Large doses of salt also make it difficult for grass to absorb oxygen and water, causing it to die.

Salt Damage Can Cause Corroded Concrete

Run-Off Issues Can Impact The Environment Around Your Home

Whether it’s the pucks themselves falling off the roof or the remnants of the salt pucks being washed away in the rain, run-off proves problematic.  This is because the elevated levels of salt make their way to groundwater, lakes, and streams.  Introducing excessive salt to foreign water sources can hinder the ability for fish, birds, and aquatic vegetation to regulate fluids.  The presence of salt also encourages damage to trees and erosion.

Icicles can be a sign of ice dams but many homeowners wrongly assume that this is always the case.  To avoid the damaging impacts of using salt pucks on your home, consider shifting your thinking from “how to remove ice dams to “how to prevent ice dams.”

Home performance diagnostic testing by a reputable professional can allow them to pinpoint where a home is losing energy.  Effective tools for evaluation include a blower door, borescope, smoke stick, and infrared imaging.  Upon completion of the diagnostic testing, a contractor can put together a custom plan that addresses areas of your attic that require sealing.

Here’s How a Blower Door Test Can Determine Where Your Home is Losing Energy:

View Project
Wendy’s River Falls, WI Insulation Project
A inspection of Wendy's attic revealed some urgent insulation and ventilation issues that needed to be swiftly addressed. Find out how the experts at Lindus Construction were able to help.
View Project
Home Insulation, Roof Ventilation & Bath Fan Project In River Falls, WI
These homeowners had a goal of eliminating ice dams, lowering their energy bills, and stopping attic condensation. Find out how our team of experts was able to help!
View Project
Gerald’s New Richmond, WI Insulation & Ventilation Project
Rampant ice dams, high energy bills, and a chilly home were all reasons our client, Gerald, reached out to us to see if we could perform a heat map analysis to come up with a long-term solution for him.  Learn about the solutions we were able to provide so that Gerald never experiences the stress or discomforts of last winter again.
VIEW ALL RECENT PROJECTS

"Jason and the insulating crew did a great job. I told Jason it looked like nothing was done when he finished cleaning, which is a very good thing.  The insulating crew did have a difficult time working under the bay window. They usually hold their spray gun about 2 ft. away from the surface. In our location, they only had a foot at the most. So, there was a lot of blowback, clean-up, and additional layers to get the final result."

"The crew did a great job - and cleaned up every day! Love that. Very courteous and explained everything."

"On two occasions, Randall was at my house involving insulation issues.  He knows the business, is easy to work with, and I think he is a great asset to your company."

"Excellent and efficient work. Thankful that the Lindus crew was accommodating to our needs as homeowners and for their communication throughout."

"Yesterday, Chris came to my townhouse to inspect my insulation. Chris was professional, courteous, and shared great information with me. A less ethical company could have easily tried to sell me additional insulation. But Chris, who represents Lindus really well, shared with me the status of my insulation and let me know there was no need to add or replace insulation. Please know how much I appreciate his professionalism and honesty. For all future projects i will turn to Lindus. I will tell my friends and family to do the same."

"We highly recommend Lindus Construction. They showed up everyday and did quality work. Very professional, polite, and answered all of our questions and concerns. The work ethic we saw was superior. We’re very pleased with the insulation and venting project they just completed. They get the highest a 5+ rating from us."