In northeast Minneapolis, there’s a neighborhood known as Waite Park. The neighborhood’s namesake is Edward Foote Waite, who was a judge of the District Court of Hennepin County from 1911 to 1941. The residents that occupy the 2400+ households are both well-educated and community oriented. A feature that makes this neighborhood unique is the vast array of home styles it contains, including bungalows, ranch style homes, and Craftsman homes.

In 2000, Greg and Gerald, acquired their home in the Waite Park neighborhood. It was previously owned by Gerald’s mother, who had raised her children there as a single mom. Built in the 1930’s, it hadn’t been renovated in nearly 40 years. Before they could even move in, the old carpets needed to be removed, floors were refinished, and outdated light fixtures were replaced. Over the years, they continued to perform upgrades to major components of the home, including the plumbing, heating, and electrical systems.

After renovating the bathroom in 2012, the next room they eyed up was the kitchen. At only 80 square feet, its spaciousness left something to be desired. The walls were a vibrant yellow and the woodwork was outdated. The chimney would need to be removed in order to accommodate a modern-day refrigerator. With the desire to both expand and modernize their kitchen so that Gerald could more easily prepare the delicious meals he’s known for, they reached out to Lindus Construction to see if we could execute their vision. 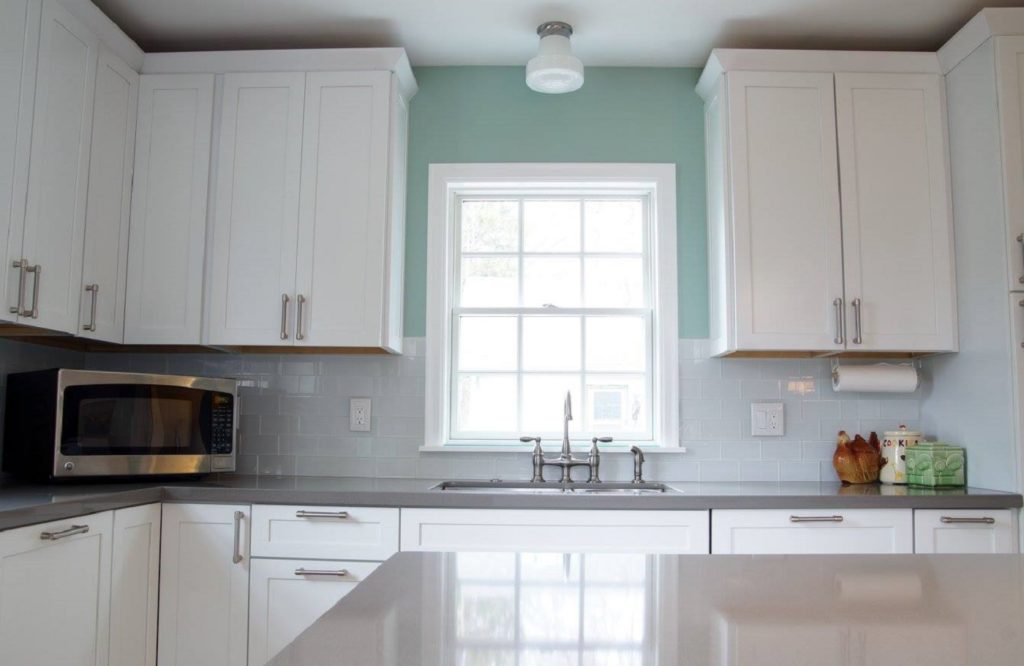 As was the case with their previous projects, Greg and Gerald’s intent was to maintain the allure of the home’s historic elements, while incorporating their own personal tastes. They understood that keeping original elements such as heat registers and hardware are integral to the home’s character. With this particular project, they kept an antique light fixture that had previously hung in the room. Ironically, they were able to find a twin fixture on an excursion to a local flea market. An electrician made a cut into the wall and found a perfectly preserved comic that had been tucked away within the walls year before. It now sits framed in that space, along with a piece of linoleum that was unearthed during this project. When they learned that the profile for the existing trim was no longer, available, they had knives custom-made so that the new trim would be a match. 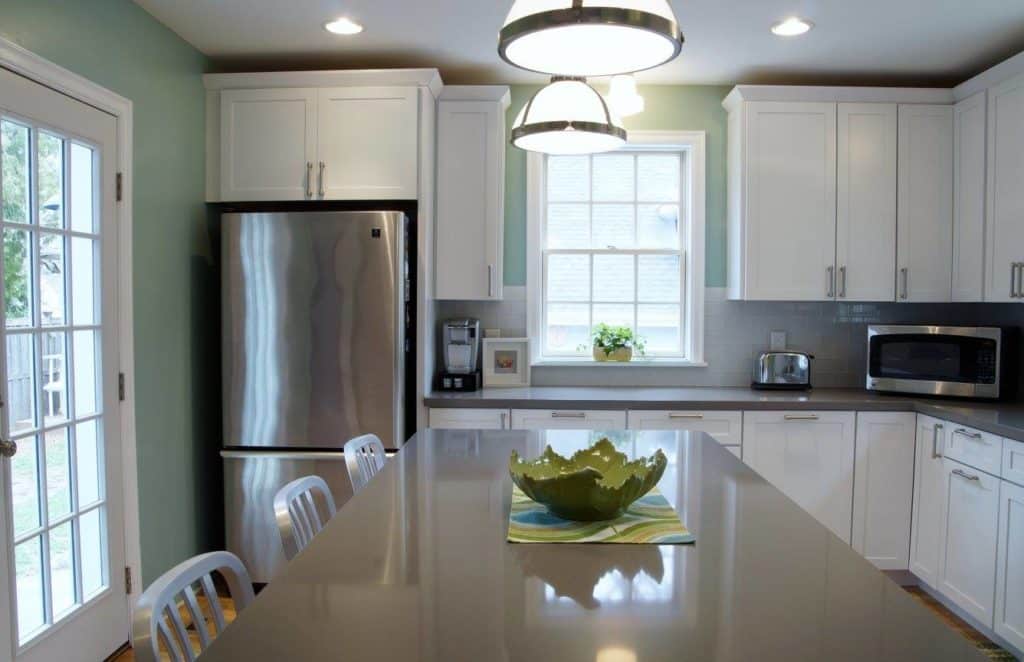 The end result was a kitchen that was doubled in size. The bright yellow walls were repainted a cool greenish blue hue. An island was added to allow for additional seating and storage. In place of the run-down brown cabinets and wire shelving, white painted cabinets were installed. The current flooring was extended and new matching flooring was integrated in order to create a seamless look. The room’s doorway was widened in order to match the home’s existing archways. The black stove was upgraded to a modern stainless steel model, complete with a coordinating range hood. Absent in the previous version of the kitchen was a backsplash. As part of this project, a glass tile backsplash was installed that coordinated perfectly with the new cabinetry. It does a beautiful job of picking up the colors around it. The vibrant yellow countertops were replaced with gray Silestone. To incorporate more light within the room, pendant lights were hung above the island and recessed lighting was added. The inadequate lighting that resulted in harsh shadows was been replaced with several LED light fixtures. 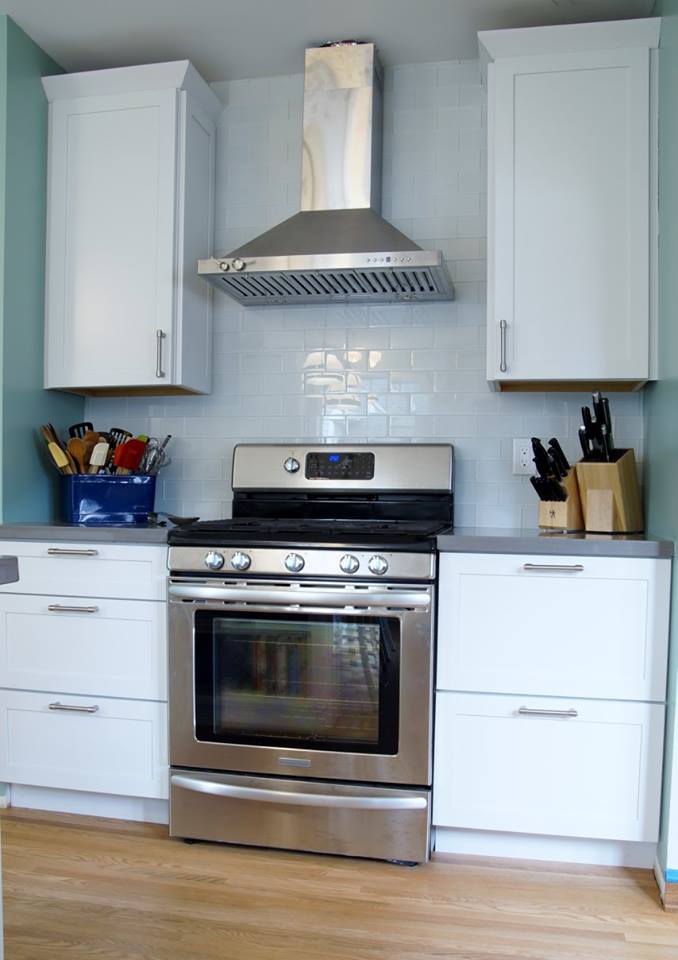 View Project
Liz’s Minneapolis Kitchen & Bathroom Remodeling Project
When a cramped kitchen and outdated bathroom were no longer cutting it for Liz, we stepped in to help!
View Project
Sandy’s Minneapolis Insulation, Garage, Dormer, & Bathroom Project
When Sandy & her brother inherited their mother's home, they knew updates would be needed to attract a potential buyer. Here's how we were able to assist.
View Project
Carol’s Siding, Door, and Gutter Project in Minneapolis
The faded aluminum siding on this historic home was hindering its curb appeal. Learn about the exterior transformation that changed the look of this historic home.
VIEW ALL RECENT PROJECTS

Ruth and I were very impressed with the way the project was handled. Daily clean-up on the site was done thoroughly. Extra time was spent on the customized front exchanges. Nice work!

"To date we have had Jason, Brock, Scott and Dylan working on our project.  Without exception, these guys have distinguished themselves as true professionals.  As you know our project is remodeling the back entry way of our 100 year old home.  Needless to say there have been challenges that would not have been encountered with more contemporary building practices.  Each time these challenges have been met with sound solutions and, as importantly, with excellent attitude.  Throughout the process they were friendly and kept us informed.  Without doubt these guys are strong ambassadors for Lindus. "

Lindus replaced our LeafGuard® Gutters that were 21 years old and had storm damage. The gutters have performed well for 21 years, and I expect the new ones will be even better as they are larger, and less likely to clog at the valleys. Installation was smooth and there was sufficient follow-ups when a couple of issues needed to be addressed."

"Yesterday I had the pleasure of getting an estimate from Brandon. Lindus should be very proud to have him as a representative of their company. Brandon was knowledgeable, helpful.....and just a really nice guy!  I've had Lindus install LeafGuard® Gutters, GAF roofing and spray foam insulation in my attic. Always the workmen were professional and the jobs were done to the highest standards.  I highly recommend Lindus to all my friends as I can personally attest to the quality work that I receive."

"Work performed as bid, timely and appears to be quality.  Feel they are a good company who do quality work."

Chris S.
Minneapolis, MN
75% Off Installation Labor on GAF Asphalt Shingles, LeafGuard® Gutters, Infinity® from Marvin Windows.  No Payments Or Interest Until April 2023. We are also offering a free heat map analysis with insulation estimates through January 31st, 2022.
Get Your Estimate
Some restrictions may apply. Call for details.
Schedule An Appointment
Tell us when you need us and we will be there.